Semisi's enjoyment of the game - and a fair dash of natural talent - led to his Uncle persuading him to join Jellicoe Park Tennis Club where Semisi is now senior open club champion, despite never having had formal tennis coaching.  He practises daily with his brother, Year 13 student Junior Fanguna, and models his game on two-time grand slam champion Andy Murray.

The lack of formal training proved no obstacle at the Counties champs in Pukekohe last month where Semisi won all four of his matches, dropping only one game throughout the day.  In the final he defeated Jarrod Richards of Tuakau College 6-0, 6-0, 6-0.

Our unheralded win of such a large number of tennis accolades has caught the attention of national media - see this article in the New Zealand Herald: 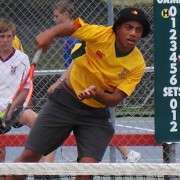