On Sunday, 11 June, New Zealand was announced fourth in the world in the middle school division of the Future Problem Solving Internationals. This world-class achievement went to a team from Manurewa High School, who competed for the first time at the internationals in 2016, and came 14th. To have jumped up so many places in one year, and come so close to the top spot, is an achievement that our community and our country can take much pride in.

The team won the National Champs in 2016 addressing the topic of The Future of Work. In the Internationals, the future problem was related to Biosecurity, and involved the safe reanimation of an extinct tree species. Our team conceived of an artificially intelligent bee that could monitor and control pollination of the reanimated tree, ensuring that existing species were not overrun by it. One evaluator ranked their exam-based solution first, another second, and another fourth, which gave them an overall fourth placing.

Clearly they are among the best in the world at creative, collaborative problemsolving.

The team is very grateful for the support they've had from their families, school, and sponsors:

Read more about the Internationals 2017 competition at our blog: 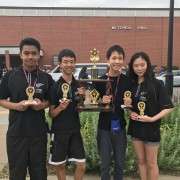