Guests in our school: the US Ambassador

We were privileged to have the US Ambassador to New Zealand, Mark Gilbert, visit our school last week to talk with our Year 13 History students. He spoke about his three favourite presidents.

1. Thomas Jefferson – a founding father, who is credited with writing the Declaration of Independence, and in particular articulating that “all men are created equal”.

2. Abraham Lincoln – known for his speech-making skills. His speech at Gettsburg, after the North won the civil war, is famous for instilling representative Government – “of the people, for the people, by the people”. Although the civil war led to the abolition of slavery in America, it was not until 102 years after it ended, in 1965, that the Civil Rights legislation gave everyone the same rights.

3. Barack Obama – has an impressive knowledge of the world and how it works. “My view is he will become known as one of the greatest presidents we ever had.”

Mr Gilbert encouraged students to balance academic focus with building good relationships. “The more people you meet, the more relationships you build, and you make the world a better place.”

At the end of the interesting History lesson, students didn’t waste the opportunity to ask some burning questions of the US ambassador about current issues. Here’s a summary of the Q&A:

Kanye West or Donald Trump be president?
A president has to be smart, honest, a team player and direct communicator. He or she has to command respect around the world.

Why doesn’t America act to fix its gun problem?
There are a lot of guns in circulation (maybe 400 million). It is not a simple exercise.

How has the War on Terror changed the world?
We have to stay vigilant and focused on these issues. It’s something that will probably be with you all of your lives.

Is the TPP trade deal bad for New Zealand?
People should do their own research and understand it before they disagree with it. Overall, it’s a good deal for a small country like New Zealand that is dependent on trade, but there are advantages and disadvantages  for all countries involved.. The Treaty of Waitangi is named in it, and nothing in it can go against the treaty.

* In 2015, Deputy Principal Andrea Bossenger went to the United States on a US State Department funded programme aimed at fostering relationships and academically investigating the myth or reality of the American Dream. Through this relationship the school now has access to a number of US guest speakers.  With how enjoyable and informative the students found Ambassador Mark Gilbert we look forward to the next guest speaker from the American Embassy. 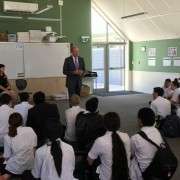 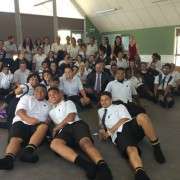 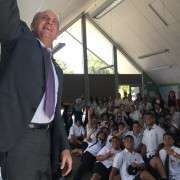