Health Week our best ever

It was a massive week at MH celebrating hauora, and it might be inappropriate to say, but the event was infectious.

The two-day Health Expo led by Level 2 Health Education students was a highlight of the week, packed out at interval and lunchtime with curious students wanting to learn more. The Level 2s must surely have nailed their assessments - related to Researching and Raising Awareness of Health Issues - through this wholistic learning experience.

Marlene Iripa’s group identified Diversity as one of the big issues for our school and community. They did their homework, talked to outside providers, and confirmed a lot of facts. But even Marlene was surprised at how much the message clicked with her fellow students.

“We’ve been gathering signatures to start up a Diversity Group in the school. The response has been amazing. Much more than I would have thought.”

Lauryn Siua’s group provides an example of how the students are not only aiming to raise awareness, but also to create change. They have developed a proposal for the school to consider changing the school uniforms and bathrooms, to be “genderless”.

“It’s not an issue for our school now but it will be in the future. We want to do something now so that those future students don’t have an issue.”

A range of providers also contributed time and resources to the event. Just Water’s Angelle Andal and Jan Aldrin Santos had a popular stall. It showed how much sugar goes into packaged and fizzy drinks. They sampled a sugar-free alternative, which they say is also half the cost of sugary drinks. Their message fits with a wider promotion at the expo, about diabetes prevention.

Rowie McEvoy, a pint-sized health powerhouse, spoke to Year 9s about a five-point plan for being healthy, fit and strong. It’s not hard, she says:

Tamara Elliot, who coordinates the Graeme Dingle programmes in our school, demonstrated how fit she is, but also how easy it is to get puffing.

Teacher in charge, Claire Stapleton, has organised Health Week for a number of years, and believes it has been building for this year to be the best yet. “The students really engaged with it.”

Claire had a lot of support from the Wellbeing Council, which is one of the new leadership councils we established in 2016.  "The best yet!!!," Claire says. "The least stressful expo I have had the pleasure of leading due to the tremendous leadership, support and initiative of our wellbeing student council. Thanks team - you were awesome." 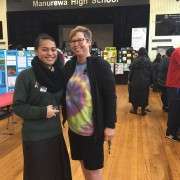 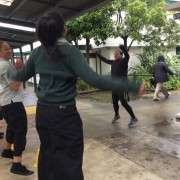 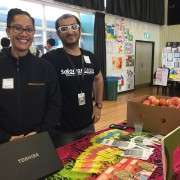 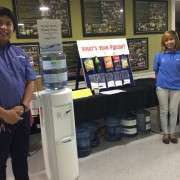 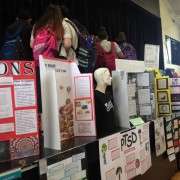 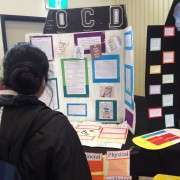 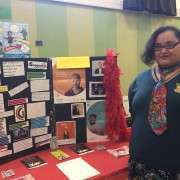 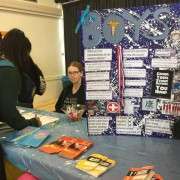