The group's mentor and coach, Swati Patel, said the team definitely lifted the standard this year.  "They worked hard on their dance, which was a mix of traditional and modern.  Six of the boys in the group are non-Indians, but that didn't stop them impressing the audience.  Rather than finding the Bollywood atmosphere overwhelming, they brought a huge amount of energy to the stage and were even confident enough to go and talk to the organisers and judges."

The thirteen students who made up the dance group were: 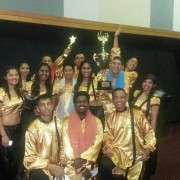