Honours for students in St John

Two students, Katie Lowry and Melissa Wu, have gained the honour of being named the St John District Cadet of the Year, known as a DCoty.

Both students have a passion for the St John Cadet Programme, which they say has helped them to develop as leaders who serve, and to understand people. They are both part of the school leadership programme as well  Katie on the Sports Council and Melissa on the Wellbeing Council.

Katie is the third generation of her family to serve in St John. Her mum, Sue, has worked as a paramedic and now runs a schools programme. Her grandparents, Murray and Lesley Guptill, are actively involved.

Melissa found her way into St John through the example of older brothers and sisters.

The programme has a focus on first aid, healthcare, leadership and general life skills. There are classes once a week, and activities on weekends. Katie says the organisation is very understanding if she has other priorities, which she sometimes does as a member of the school waka ama squad, and a keen competitor in orienteering, cross country, and athletics.

There are a large number of cadets, and winning the DCoty award is highly valued. Well done Katie and Melissa! 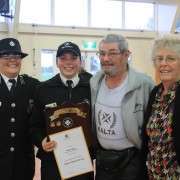 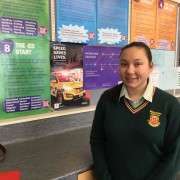