John and Leonie Hynds inducted into the Business Hall of Fame

John and Leonie Hynds have been recognised nationally for their success in life which began in Manurewa. At a large event in Auckland in July, they were inducted into the Business Hall of Fame along with seven other enterprising New Zealanders.

John and Leonie met at Manurewa High School, and went on to raise a family while building a successful business, Hynds Pipe Systems. You will see the HYNDS brand on manhole covers on footpaths and roads. Underneath those covers are the pipes that manage water and waste for our communities. The business has more than 700 employees, and operations across New Zealand and Australia.

John and Leonie have been long and loyal supporters of their high school and current students. They also support past students with tertiary education scholarships. John is a representative on our Board of Trustees, and founder of our Business Academy, which is creating valuable opportunities to support our students’ future success.

The Business Hall of Fame event is run by the Young Enterprise Trust, and current Young Enterprise students were invited to be part of proceedings. Year 13 student Dakota Moreau had the honour of sharing the story of the Hynds’ business journey. He made us very proud and impressed many of the 620 guests, who connected with him personally. This included the Governor General Dame Patsy Reddy, New Zealander of the Year Dr Lance O’Sullivan, and TV personality Samantha Hayes.

In John, Leonie and their family, we are fortunate to have outstanding role models who have realised their creative, enterprising and entrepreneurial potential, and given back to the community that nurtured them. Through the Business Academy, we aim to encourage the next generation to follow in their footsteps! 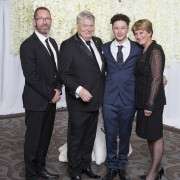