Keeping it in the family

The Peck Cup for "Football Boys Most Improved Player" was awarded to Andrew after his first season playing soccer for theschool.  Andrew was surprised to discover the same cup was won by his father, Neil (pictured with Andrew) - in 1978!

Manurewa High School's sports awards were held last Wednesday.  Thirteen sportsperson of the year awards were givento athletes who have excelled in sport at an international/national level.  The recipients were:

Congratulations to all of these students whose commitment and enthusiasm for their chosen sport makes them very deservingwinners. 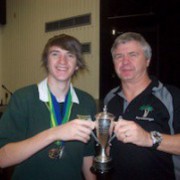