Known as the 'Manurewa Marvels', the team played at the ASB stadium last Wednesday 22 August. They won all their games, but an administration error saw them recorded as the losing team in the second round (when they had actually won 22-0!).  When the official tally was corrected, the Manurewa Marvels emerged as the winning team.

Team Manager Patricia Gargiulo said the students played at a higher level than last year largely thanks to their PE coach Mr Hogan.  Mrs Gargiulo said "We were all delighted with the result.  We were also the only school to make our own banner which was proudly hoisted and paraded around prior to the competition." 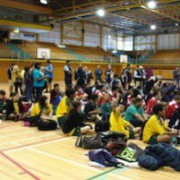