Last year Blessed made it to the national finals as a duo, alongside the band Nesian Vibes also from Manurewa High. The two joined forces this year.

Vocalist Nicola Nimo says the win on Saturday night was unexpected. “The talent and commitment (of the other bands) was just crazy and we were shocked and humbled to earn first place.”

Many of the musicians and singers involved in the Pacifica Beats success are also going well in Smokefree Rockquest, including Sonatane Kaufusi, who won the regional solo event a few weeks ago. Last year, he was national runnerup in this category.

It's sounding like it's going to be another great year for Manurewa Music! 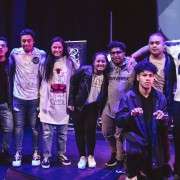