Nick does it again!

Nick won the Auckland Senior Mens Golf award at the awards, held  at the Ellerslie Convention Centre.  Last year Nick won the golf category at the same awards, which recognise students who have performed with distinction in the regular senior secondary school sports competition organised through College Sport.

Eighteen year old Nick has stamped an emphatic mark on New Zealand's golfing scene.  The Manukau amateur surprised everyone including himself when he shot a four under par 68 to lead round one of the New Zealand Stroke Play Championship this year.  He ended the champs in 19th place, after rattling the composure of many more experienced competititors.

Nick is an Auckland rep, with four top 10 finishes at national events around New Zealand in 2012 including fourth place in the individual standings at the SBS Invitational in Invercargill - his best performance. He is described as a player of great potential with a fine swing.  He practises 25-30 hours per week at his home club, the Manukau Golf Club.  He has been selected for the Srixon Development Squad for 2012 2013.

All that success hasn't gone to his head though.  Nick has a reputation for outstanding sportsmanship which makes him a popular member of his club.

Well done Nick.  Manurewa High School is incredibly proud of your achievements, and we look forward to seeing you go even further. 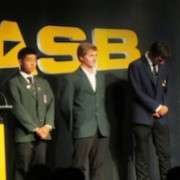