The NZ Culinary Fare is organized by the Restaurant Association of New Zealand.  Top chefs from around the country compete, and secondary schools are invited to participate in four events.  The students' combined efforts earned Manurewa High School the Secondary Schools Excellence Award 2012 - given to the school with the highest aggregate marks during the competition.

Marks for the competition are awarded as follows:

Individually, the students were outstanding, with the following achievements:

In the Cafe Breakfast section, students must prepare and present a cafe style hot cooked breakfast for two. The breakfast must include bacon, sausages, tomato and eggs.  Kajal Sharma was awarded Bronze in this section.

Aygnin Ing won Bronze in this challenge, where students had to prepare and present two portions of a specific recipe provided by competition organizers.

Students had to prepare high tea including sandwiches, petit scones and elegant cakes served on a three-tiered stand.  Elizabeth Filimoemaka received first prize with her silver mark of 84%.  She was closely followed by Mariah McGregor who also achieved silver with 83%.

Manutu'ufanga Kaitapu won Gold in this challenge with a mark of 90%.  Joseph Liugalua won silver with 84%.  They had to complete a full table restaurant setting for four people.

Well done to all students who took part - a fabulous achievement which upholds Manurewa's tradition of excellence in the hospitality sector. 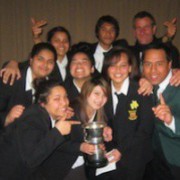