I met Murray on his first day at Manurewa High in 1979. Although he was employed as a teacher of Mathematics he came from Ngaruawahia High School where he had been a teacher of History (my subject). I am still at the school (53 years after my arrival in 1964) and while Murray’s final year as a full-time teacher was 2011 he continued as a reliever 38 years after his arrival.

In 2016 a member of the Maths Department took a photo (see below) of the two of us and labelled it “100 years of teaching”. Both of us were doing reliever work in school classrooms right up to 2017.

Murray was a very popular teacher. Thousands of people viewed the Facebook notice of his passing, and hundreds of people made Comments. Here is a sample:

Matt Metcalfe was both MHS Alumni and teacher. He wrote: “Had him as a teacher and a colleague. A man of great character and fun. I will miss the games of 500 in the lunchbreak. Time to swindle the gatekeeper with an open misere.”

Murray always sat at the same seat in the staffroom at interval and lunchtime and spent most of his time there playing cards. Rob Henley described Murray as the card table.

One experience both Murray and I share is being informed by students  that you taught their parents. When Murray was told “you taught my grandmother” he decided it was time to stop full-time teaching and do relieving. 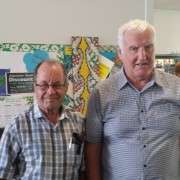