Their fame came about after the students featured their honey product at the Auckland Food Show.  Their stall was visited by a TVNZ producer who liked their pitch so much she gave them her card and told them to contact her.

Once they did everything fell into place, and before they knew it, the excited - and nervous! - group of students joined Astar on her show.

Once the nerves dissipated, the students relaxed and ended up having a great time on the Good Morning show.  They are justifiably proud of their achievement, and hope to feature again later this year as TVNZ have said they would like to follow up with the students when beehives are introduced into the school. 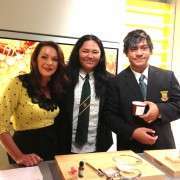