Congratulations to the Samoan Group, who won first place at the ASB Polyfest during the weekend.

The ASB Polyfest is the largest Maori & Pacific Island cultural festival of its kind in the world. This year approximately 9,000 students from 59 schools and 200 performing groups took to the stage, showcasing  speech, song, and dance, their cultural experience.

Students competed on five stages - Cook Islands, Maori, Niue, Samoan and Tongan. There was also a Diversity Stage featuring performances from a range of cultural groups including Chinese, Tuvaluan and Indian.

All of the Manurewa High School students who took part in the event conducted themselves exceptionally well.  A special mention must go to the Samoan group, who won first place overall, and first place in many other categories.

The festival is an iconic Auckland event which is now in its 38th year. It is a celebration of traditional music and dance, and promotes cultural awareness and understanding, bringing the pride and passion of Aucklands Maori and Pacific Island communities to life. 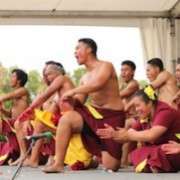