Past student Amy van de Weg was there to deliver a speech as last year's winner.  There were 21 schools represented, and 207 entries - so competition was stiff.  As in recent years, Manurewa High School students dominated the podium with the following awards:

Susan Ly's award was particularly notable.  Her scholarship means she will attend an all-expenses paid week of Science in January 2013 at Otago University in Dunedin.  Her project 'Contemplating Coconut Carbs" won "Best Scientific Application and Method" as judged by the representative from Otago University at the Science Fair.  Susan will get a taste of a variety of Scientific activities both on and off the campus.

Science teacher Fenella Colyer, says she was "very proud" of her students achievements, and the way they  conducted themselves at the Science Fair. 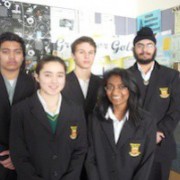