Four of our students won awards at the NIWA Manukau Science Fair on Wednesday 20 August.

Another year 12 student recognised on the night was Ranish Chand who was awarded the University of Otago Award.  The award will see Ranish enjoy a week-long trip to Otago University to attend the “Hands on Science” week. This is the third consecutive year that our school has won this award.

In the Junior category, Samantha Oh of 10 KFR was not to be outdone. Sam won the award for Second Place in Y9 & 10 Physical & Material World, as well as the DairyNZ Award.

More details on the winning projects will appear in the school magazine.

Congratulations to all these students who showed proficient time management skills, and superior ability to work independently and to persevere in the face of obstacles. 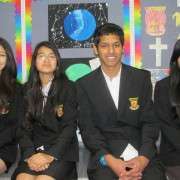