2013 is off to a great start for 15-year-old student Freedom Nathan.  The talented para-shotput athlete enjoyed a day of personal coaching with Valerie Adams yesterday.

The world shot-put champion is back in Auckland this week for the 50h Westpac Halberg Awards, and visited Manurewa High School in support of the Halberg Trusts work with disabled athletes.

Freedom Nathan is determined to reach her goal of competing at the 2016 Paralympic Games in Rio de Janeiro, and the visit from Adams was a real boost.  And it seems the learning went both ways  Adams admitted Nathans visual impairment gave her a new respect for coaches of disabled athletes.  ''You have to really get Freedom to feel the throw, the starts and the push, as opposed to trying to show her which is obviously a lot easier.''

The training session was a huge success for Nathan, who managed to double the 2.5 metre Paralympic qualifying mark with a throw of 5.24m at the end of the day.  Shes my sporting hero and an amazing role model too, said Nathan, who described Adams as awesome to work with.

During her visit to Manurewa High School, Adams pulled no punches when she took part in a game of Goalball  a paralympic sport for visually impaired athletes.  Competitors listen for a bell inside the ball to figure out where it is in the court, and use their entire bodies to block shots from entering their goal area.

When I first heard about it I was really nervous, and when I played it, I sweat more concentrating on listening for the ball than actually playing it! Valerie grins.  But I really enjoyed it. It was pretty brutal, its a lot harder than it looks, she says, gesturing to a bruised knee. 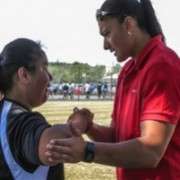