Thank you for all your support as we continue to navigate the challenges of COVID-19 Delta. Due to the rising number of COVID cases across Taamaki Makaurau and the high number of our senior students and whaanau who do not feel comfortable to return at this stage our Senior Leadership Team has made the decision today to delay our return to school until Monday 1st November. Read More...

The 2014 Smokefree Rockquest's finalists have been announced - and our very own Year 10 student Cam Dawson is one of them!

Cam is one of three solo/duo musicians selected for the finals, along with six bands.

This is a fantastic achievement - over 700 entries were received for the nationwide competition which has launched the careers of many famous kiwi artists including Kimbra, OpShop, The Datsons and Steriogram.

Cam is now busy rehearsing for the finals which will be held in at Auckland’s Q Theatre on Saturday 27 September.  Tickets will be on sale from Q Theatre from August 25.  The event will be opened by the overall winner of the People’s Choice Award, with the voting taking place on Facebook now - so please show Cam your support and get voting!  You can see Cam performing on YouTube.

We wish you all the best Cam!

Also performing at a Smokefree competition in September is Tequila Moses, who was named one of two top soloists in the Smokefree Pacifica Beats competition.  Tequila is not in the running for national final awards, but will perform at the finals.  In addition, Tequila will spend a weekend of music, friendship, mentoring and culture at the noho marae (band camp) held at Horotiu Marae, Auckland University of Technology.  You can see Tequila perform at the Smokefree Pacifica Beats final at Auckland’s Q Theatre on Friday 26 September, start time 7pm.  Tickets will be on sale from Q Theatre from August 25. 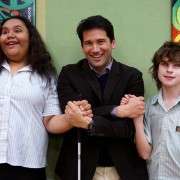