Rosemary Pokoati won gold in Kumite (sparring/fighting) and silver in Kata (choreographed patterns of movements).  She then faced opponents from Japan, New Zealand and Australia in the trans-Tasman Open Women's competition, where she won bronze - an incredible achievement considering she was the youngest competitor in the division.

Both Rosemary and Mathew have their sights set on competing at the World Champs, to be held next year in South Africa.  It's great to see our students working so hard and aiming so high! 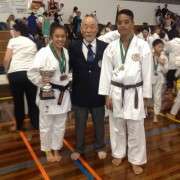