The crowd goes wild for E-Sports

This is big news – just watch this story on Seven Sharp if you don’t believe it.

Not only is this an opportunity for five fiercely competitive E-sSports players, it represents the next stage for the game in New Zealand.

As teacher Steven van Garderen explains: “From now on we will start to see the game become a sport like any other in schools. There will be inter-school competitions played live. The sky’s the limit with how big this will become.”

According to its promoters, E-sports has a player based of around 70 million globally – compared with seven million for rugby. It packs out sports stadiums overseas. And it packed out our hall on Wednesday, 31 August, for the national launch of E-Sports in schools.

Why Manurewa? Steven says interest kicked off a couple of years ago, when it was introduced as a “REWAlise” option for Year 9 and 10 students. REWAlise is an event for teachers and students to develop their learning partnership. It’s a week of activities that can include teachers’ personal interests. In Steven’s case, that’s computer gaming. Last year, some 400 students asked to take part in his REWAlise option, showing its popularity.

An E-Sports reporter who attended the national launch event says its appeal is that it’s new, and has been led by players. “It’s what’s next in sports.”

The hexa-dome in Eden Park? 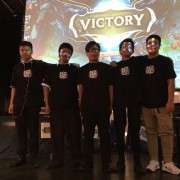