The student with the 'Million Dollar Smile' won Manurewa High School the award for 'best performance on and off-stage' at this year's Trash 2 Fashion Awards, run by Auckland Council in partnership with the Keep Waitakere Beautiful Trust, and held at Corban's Estate in Henderson.

For the first time, this year's Trash to Fashion event extended an invitation to schools from South Auckland.  After running a successful Trash2Fashion art unit for the Year 9 students in the first half of the year, the art department from Manurewa High School decided to throw their hat in the ring and compete in the 'Perfectly Pasifika' category against some experienced and serious competition from schools all over Auckland.

Thinking outside the square to produce an innovative garment from rubbish proved a tough task for the year nine students.  The school competition required garments produced only from waste, using no toxic products such as glue, tape or staples.  The students had to produce an extensive documented portfolio including drawings and photographs, and a complete garment (head to toe).  Some fantastic garments evolved, and one group of students had produced a work so impressive it was entered into Auckland Council's Trash2Fashion competition.

1600 entries were submitted to the competition, of which 467 registered and committed to two intense weekends of rehearsals, plus three shows and an awards event.  117 were then chosen to compete at the Mangere Arts Centre semi-finals.

Manurewa High School's garment, made from plastic bags, rope and newspaper, was designed by Sonatne Kaufusi, Charlie Thach, Jak Richards, Grace Neru and Leli Kaifoto.  Sonatne was the designated model, and he clearly took his role to heart!  Judges at the Trash2Fashion event named him the contestant with the "million dollar smile", and Sonatne's pride and fantastic attitude earned Manurewa High School the 'Best Performance On and Off Stage' award.  Sonatne was a hugely popular contestant, making friends with all the other students involved in the competition.  He even left his cell phone behind for the rehearsals so he could fully engage and observe.

It was a great experience for our younger students, who conducted themselves exceptionally well at the event.  Sonatne is keen to enter the awards again next year. 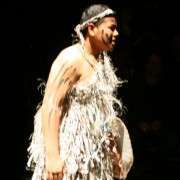