What a huge event this year with 109 Schools and 1850 paddlers all fighting it out for top honours.

Although the weather was abysmal, the racing was top quality and exactly what you would expect from a National Tournament laden with World Champs and Club Champs.

It was hard to take your eye off any race. We had six crews racing in three disciplines - 37 students in total ranging from Year 9 to year 13.

Our teams experienced every emotion that sport can dish out. We came away with a silver medal in the W12 U19 mixed Champ Final but we weren't able to add to Champ medals throughout the week, even though our top teams all progressed to the finals and often there was only a second separation. Such is life in sport and full credit to the teams - they were humble in victory and gracious in defeat.

What's exciting is that our U19 development teams were mainly made up of Year 9 and 10 students. 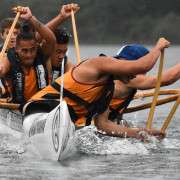