Our Waka Ama squad travelled to Samoa in August to compete in the Alo Paopao event in Apia.

As well as achieving great results on the water, the students were the talk of the town for the way they represented their school with pride and humility. So much so the NZ High Commissioner dropped by to speak with and congratulate them.

Thank you to everyone that supported us in many ways. 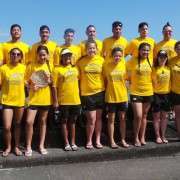