Twenty-two teams from a range of schools took part, where Manurewa High School showed their strength in the practical components of the competition.

Naeem Mirrany, Kenny Zhou, Adhitiyan Krishnamoorthy and Caleb Davies worked together as a team in a competition to build a wind resistant structure from everyday materials.  Their creative problem solving gained them first place in that section of the competition.

In the main event students were tasked with finding a creative way to problem solve around an earthquake, including a presentation that was creative and cost effective.  A second team from Manurewa High School; Shaeden Cullen, Daniel Blakeborough, Prinesh Chand and Garion Gleeson, scored 94% which won them this section of the competition. 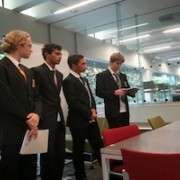