The world is welcoming our students with open arms. Through the combination of talent and hard work, they have won many opportunities to perform and compete on global stages this year.

Manurewa means kite. These kites have taken us across the world in 2019:

The REWA All Stars competed at the Olympics of Hip Hop in Phoenix Arizona, making fans and friends. Their opportunity came when their 2018 Fresh Prince performance went viral, attracting millions of views and the attention of the Fresh Prince himself, Will Smith.

Mile Naime has seen her dedication to her sport rewarded with selection for the New Zealand junior athletics team. She competed at the Oceania champs in Australia, and has a bright future ahead.

Yashna Kumar is a scientist, creative technologist and Community Problemsolver who was invited to speak on the future of learning at a global conference in New York. She has embraced our Maker Space and Community Problem Solving initiatives, which demand enormous amounts of her personal time, out of concern for her community being left behind in a future transformed by technology.

Aaron Lew, Aimee Lew, Ella Guiao and John Chen competed in a national Maths Modelling competition in which they had to calculate the number of people that our planet could sustain. The team was one of only two selected for the global competition. They were commended for their unique approach to the modelling challenge, which was informed by the empathy they have for communities critically affected by a growing global population.

John Chen also won the opportunity to go to Poland with a New Zealand team for the International Young Physicists Tournament. The team won the silver medal.

In addition to Hong Kong, Aaron Lew was selected for the International Youth Science Forum in Barcelona and International Science Camp in Germany.

Erita Thomson has helped take our Kapa Haka group to the next level in Polyfest. Her passion and skills have also seen her selected for international Kapa Haka events. Her leadership ability took her to Oregon where she participated in an indigenous people's development programme.

Elmira Booth is a Fututre Problem Solver whose passion is for the environment. Inspired by the young Swedish student who started the global Climate Strikes movement, she helped to organise the student climate strikes in Auckland. She joined a speaker panel at a technology conference to challenge business leaders to make changes. Elmira came to MHS in 2016 looking for leadership opportunities, academic growth and close friendships and has gotten all three.

All For One Locker Project built lockers and found a location for them in Manurewa town centre. They provide a safe place for homeless people to store their belongings. The students were invited to be part of the International Future Problem Solving Competition, and placed fourth in the world for their project.

Buddy Bench is an example of a business solution to a community problem of bullying or being socially isolated in school. The business creates bespoke benches and an educational programme that helps students understand how to help each other. The founders, Gemma, Natalie, Wendy, Francis and Ananya, hope that by developing behaviours of talking about problems and being supported, we will begin to solve mental health problems. They aim to take their project to the 2020 International Future Problem Solving Competition, and to see the business thrive beyond their time at school. 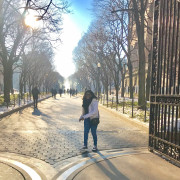