Catching up with ... Wendy Petrie

Television. Wendy is the co-host of ONE News each weeknight at 6pm, a role she has held for eight years. She has had a distinguished career in news broadcasting, in New Zealand and North America, where she worked for a major news channel covering big global events.

During her time working on One News, she's covered many big events including the Pike River Mine disaster, Christchurch's earthquake, the Rugby World Cup and the Royal Wedding (William and Katherine). She has also proved herself an expert in coverage of global news events. This included the suicide bomber attack on London's transport system, which killed dozens and paralysed the city. When the Boxing Day Tsunami struck Southeast Asia, she presented the ONE News bulletin for 13 days straight, with all the latest developments.

While in Toronto, Wendy worked on the equivalent of Canada's CNN. The job involved six hours in the hot seat, presenting news updates, covering live events and interviewing reporters in the field across the country and abroad. News events she covered included the US led war in Iraq, the Space Shuttle Columbia tragedy, the death of the Queen Mother and the SARS outbreak which killed dozens in Toronto.

Wendy also worked as a North American correspondent for New Zealand in her time overseas, travelling to New York on September 11 to report on the Twin Tower terrorist attacks. She returned to New York a year later to cover the one-year anniversary, speaking to Kiwis who had lost loved ones in the attacks.

Adding to the pace of Wendy's exciting life are the three children she shares with her husband Ross. 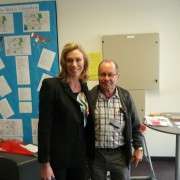