Sports Coordinator Melina Martene says the Auckland Champs were a gauge for the teams, to see how they compared to top schools such as Western Springs, De La Salle and Auckland Girls Grammar.  Unlike the teams from Manurewa High School, most of these competitors are club paddlers in addition to representing their schools, so have the advantage of considerably more time training both in and out of the water.

Ms Martene says that despite the vast difference in experience, water time and paddle fitness, Manurewa High School held their own and were able to raise a few eyebrows with their performances.

Our J16 boys team (who only have three paddlers back from 2012's Nationals team and two who have only paddled for a total of 10 weeks) proved they have genuine potential, placing second to De La Salle College.  The team missed the start and came out of the line last, yes managed to finish a very respectable second place.  Ms Martene says that once the team have spent more time working on the small things like starts, it will make them serious contenders at the nationals.

The J19 girls team (made up of one year 10 and three year 11s) is rated by Ms Martene as another exciting prospect for the nationals in two weeks time, saying It is by far the most competitive girls team I have coached here at Rewa, and it really comes down to them responding to the trainings and taking ownership of their team.  At the Auckland Champs this team placed second to Auckland Girls Grammar whom all paddle club and have represented NZ.   The second placing is just huge for them. This team is small in size but huge in heart, says Ms Martene.

The J19 boys have only had two weeks together after a slow start to the season.  In the Auckland champs they placed an encouraging fourth against the likes of De La Salle and Western Springs.

Ms Martene says the teams are all happy with the results, especially considering a chaotic term which only allowed for four weeks training.  But she says the students still know they have a long way to go, and a lot of work to do, to improve on their results from the Auckland champs as they look forward to the nationals in two weeks.  We must train to race and train to beat whomever is currently the best in NZ. If we do that collectively we may create some upsets.

The teams and results are as follows: 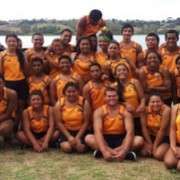